Myanmar at risk from extreme climate 18 March 2020 - Source: THE ASEAN POST -According to the Global Climate Risk Index 2020, Myanmar has had the highest weather-related losses in the past two decades, alongside Puerto Rico and Haiti. It is said that Myanmar is also one of the most vulnerable countries at risk of the climate crisis. The consequences of climate change can be seen around the world, with natural disasters and rising sea levels headlining global news. In Myanmar, severe flooding in recent years and 2008's disastrous Nargis cyclonic storm have affected the lives of millions of locals and caused over 100,000 deaths. The deadly tropical cyclone was deemed as the worst natural disaster recorded in Myanmar's history.

The dry zone of Myanmar lies in the central portion of the country, home to nearly a third of Myanmar's total population. According to media reports, temperatures there are projected to rise by up to three degrees Celsius (3° C) after 2040. In the Irrawaddy delta, in the south – the mid-level projection for sea-level rise is up to 40 centimetres (cm) by 2050.

Shashank Mishra from Myanmar Climate Change Alliance, which is a body that straddles the United Nations (UN), the government, and civil society – told the media that "the total monsoon period has already decreased from 144 days per year in 1998 to 125 days." He also added that the number of extremely hot days is projected to increase from one day a month to between four and 17 by 2041. This will cause serious health problems to the locals, damage ecosystems, crops and infrastructure. 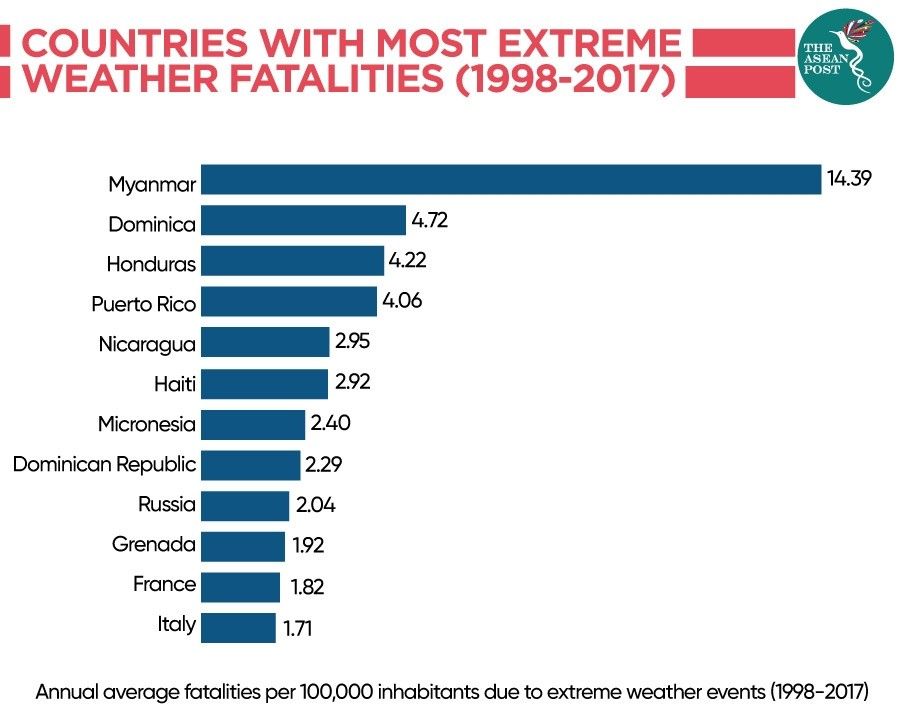 Historian and author of The Hidden History of Burma, Thant Myint-U pointed out that the impact of climate change on Myanmar could be catastrophic in terms of rising sea levels, extreme heat and extreme weather events.

Myanmar's unstable weather has resulted in the loss of production and rising indebtedness for local farmers.

Based on a 2017 report titled, 'Assessing Climate Risk in Myanmar' by the World Wide Fund for Nature (WWF), agriculture is the main economic activity in Myanmar and the largest employer of the labour force. The rise in temperature has severely affected the agriculture sector in Myanmar. The WWF report stated that crop productivity could decline, as some crops are especially vulnerable to temperature increases. Drought incidence would likely increase as well, affecting agriculture, livestock, wildlife and communities alike that struggle with declining water availability resulting from increased evaporation.

The Irrawaddy delta is known for its fertile area for rice growing and was once called the "rice bowl" of the British Empire. It was reported that production was so good that Myanmar could feed its people a high amount of rice with enough left over to be sold. Unfortunately, the cyclone in 2008 flooded paddy fields with seawater, damaged irrigation systems and destroyed seed supplies. The UN Food and Agriculture Organization (FAO) estimated that cyclone Nargis impacted 65 per cent of the country's paddy fields. This is one of the many examples of how climate crisis could affect food security and the livelihoods of local farmers and the public in general.

Other issues faced by farmers as a result of climate change include an increase in weeds, diseases and insect pests that may find the new climate more hospitable.

Based on a paper published in the Munich Personal RePEc Archive in 2019 titled, 'Economic Assessment of Climate Adaptation Options in Myanmar Rice-Based Farming System', the central dry zone of Myanmar suffers a significant climate variability due to droughts and floods resulting in crop destruction and increased vulnerability of farm households.

From 2015 to 2019, a project called 'Addressing Climate Change Risks on Water Resources and Food Security in the Dry Zone of Myanmar' initiated by the United Nations Development Programme (UNDP) was carried out to provide farmers with the resources, knowledge and tools needed to support good harvests, despite changing weather patterns. The project aimed to reduce the increasing impacts of climate change on agricultural and livestock production cycles in the dry zone of Myanmar.

In 2019, the government of Myanmar launched two new policies that will guide Myanmar's environmental management and climate change strategy. The National Environmental Policy and the Myanmar Climate Change Policy were introduced as there's a growing awareness that extreme weather and other climate change events could threaten and impact the country's economic and social development.

A number of initiatives have been proposed by the government and related organisations to help fight the climate crisis in Myanmar. The Myanmar Climate Change Strategy 2018-2030 was also drafted by the country's Ministry of Natural Resources and Environmental Conservation (MONREC) with assistance from other organisations. The long-term goal of this strategy is to achieve climate-resilience and a low-carbon growth pathway to support inclusive and sustainable development by 2030.