The price of Indawgyi’s gold Facebook Twitter LinkedIn Pinterest
For communities living around Kachin State's Indawgyi Lake, small-scale gold mining is a vital source of income, but it is taking a toll on the lake's ecosystem.​

28 Dec 19 - Source: Frontier Myanmar - INDAWGYI Lake in Kachin State's Mohnyin Township is one of the most scenic spots in Myanmar. Its smooth, mirrored surface and tranquil surroundings give visitors little indication of the threat being posed to the lake's integrity and the rich biodiversity it supports. This threat, though widely acknowledged in the area, is inextricably linked to one of the local community's main sources of income – gold mining.

At 24 kilometres long and 10km wide, Indawgyi is nearly twice the size of Shan State's Inle Lake, which unlike Indawgyi is a major draw for foreign tourists. Indawgyi is the largest lake in Myanmar and the third largest in Southeast Asia.

The lake provides a winter sanctuary for more than 20,000 water birds, and endangered hog deer thrives in the adjacent, seasonally flooded grassland, according to UK charity Flora & Fauna International, which conducts conservation programmes in the area.

Frontier's bird-watching guide said during a trip on the lake that of the 1,121 bird species identified in Myanmar, 566 have been spotted around Indawgyi, including 10 that are globally under threat, such as the White-rumped vulture and Slender-billed vulture. 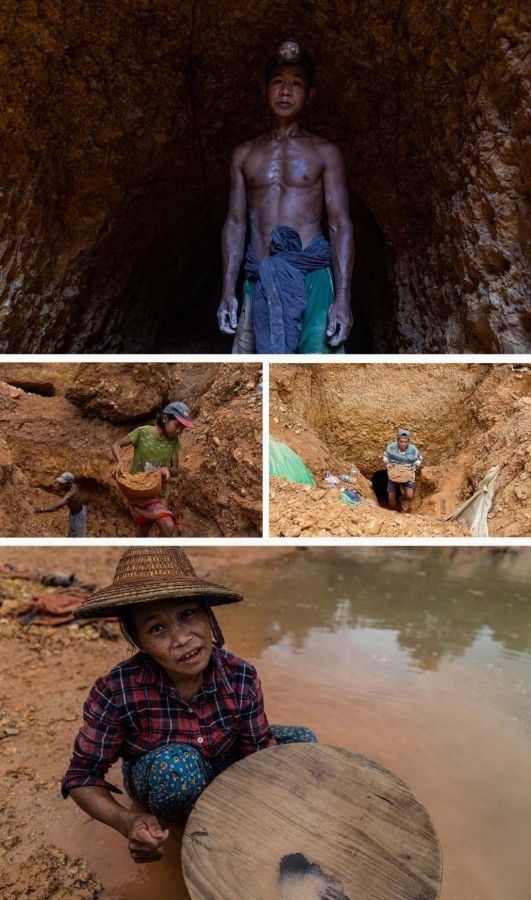 The Indawgyi Wildlife Sanctuary was established in 1999 to preserve these and other natural assets and in 2017 the United Nations Educational, Scientific and Cultural Organization inscribed it as a Biosphere Reserve. The year before, it was declared a wetland of international importance under the Ramsar Convention, the second to be listed in Myanmar after Moeyungyi in Waw Township of Bago Region.

Indawgyi's thin trickle of visitors is often drawn by the bird watching opportunities. However, a Buddhist pagoda set on the lake, Shwe Myintzu, is Indawgyi's most iconic sight nationally. During a festival held in the latter part of Tabaung, the final month in the traditional Myanmar calendar, which largely falls during March, the water level recedes naturally to form a path from the shore for pilgrims to walk to the pagoda.

Most of the people living around Indawgyi, who number about 35,000, are from the Shanni, or Red Shan, ethnic group. They make a living from fishing and farming but also gold-mining, which is conducted illegally several kilometres from the lake in hillsides beside the Hkaung Ton creek, whose waters feed directly into the lake.

Waste and chemicals from the gold mines, which cascade into the creek, end up contributing to sedimentation in the lake as well as increased mercury and cyanide levels.

Ko Paw Lay, who works with Inn Chit Thu, a community group engaged in ecotourism ventures around the lake, told Frontier that although local communities have mined gold in the area for generations, production ramped up with the introduction of heavy machinery in 2009. Since then, 200 acres of the lake's surface has silted up, he claimed.

This mining is completely unlicensed and unregulated. In 2017, Minister of Natural Resources and Environmental Conservation U Ohn Win told the national parliament that his ministry was unable to clamp down on the practice because of the instability caused by the long-running conflict between the Tatmadaw and the Kachin Independence Army, both of which assert control over different patches of territory around the lake.

However, under the current government, which came to power in 2016, the use of heavy machinery has been largely phased out, Paw Lay said. Most of the miners are self-employed, and locals are joined by small groups of migrant workers, who are often from central Myanmar's Dry Zone.

A 10-minute motorbike ride west of Lonton, the main settlement on the western shore of the lake, takes visitors to the goldfields of Mine Hnaung, Way Thwin Kyauk, Kyauk Thin Bone, Ma Hmon Kaing and Nant Pateh, which are all near the village of Ma Hmon Kaing. 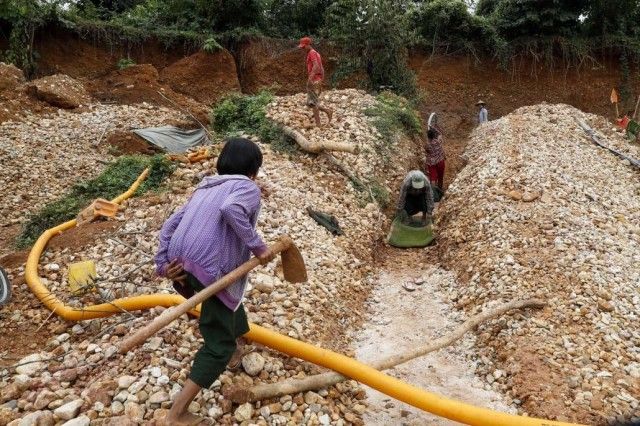 Frontier visited these goldfields on November 9 and met U Sein Lwin, a miner from Ma Hmon Kaing.

"We collect five to seven yway of gold a day," he said, referring to a Myanmar unit of measurement. One yway equates to 0.1361 grammes, which can earn a miner about K8,000.

"Poor people like us depend on these goldfields," Sein Lwin said.

The gold collected by miners such as Sein Lwin is sold to brokers in Ma Hmon Kaing or further afield in the town of Hopin, from where the trade passes to the state capital Myitkyina.

"Today is a holiday, so all the members of our family have come here to dig," said Sein Lwin, speaking on a Saturday. He was joined at the mine by his wife and three children, who attend school during the week. 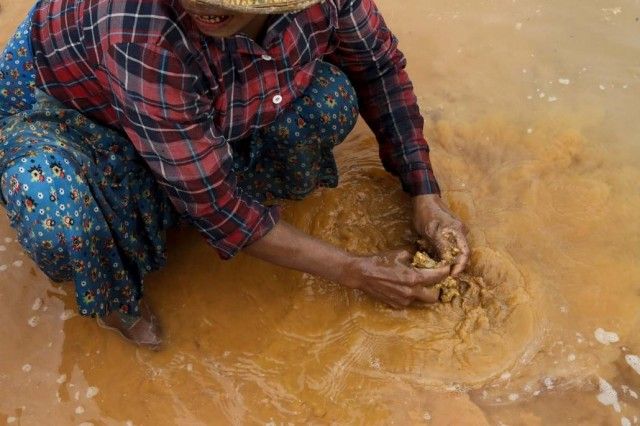 Other threats to the lake include deforestation for commercial timber, which further increases the flow of sediment into the lake, and the discarding of fishing nets that then kill fish and the birds that hunt on the lake for fish. "If you remove these nets, you'll see lots of rotten fish trapped in them," said Paw Lay from Inn Chit Thu, which is one of a number of groups that undertake net collection drives on the lake.