Figure 1: Location of Block A-6

22 Dec 19 - Source: Global New Light Of Myanmar - Shwe Gas Field has proved the existence of natural gas deposits in the western offshore region of Myanmar. Natural resources are a blessing only for those who deserve it, and hence, it is Shwe Field, the third project in the Myanmar offshore region, which opened a new chapter in the history of oil and gas resources located in the western offshore region in 2004.
Sedimentary rocks deposited from the land in the north and east profusely populate the western offshore region, and give rise to natural gas traps under the Pliocene sandstones and Miocene sandstones which deposited over a period of 5 million to 10 million years. On land, the presence of petroleum deposits inside ancient Miocene sandstones, Oligocene sandstones, and Eocene sandstones has been known since the old days, and oil from shallow oil fields in the Yanbye Island (Ramree Island) on the western coast keeps flowing until today. Once the rock formation enters the sea, the deeper the water depth, so is the petroleum reservoir. The water depth in the western offshore region can range between 2,000 meters to 2,500 meters, and there have been further efforts to identify the potential of natural gas reservoirs there.
In the offshore region, a total of 51 blocks have been formed for oil and gas exploration, and based on the country's geological features, the blocks have been divided into shallow ones and deep-water ones. Also, they have been named accordingly, and International Oil Companies (IOC) have secured rights to explore these blocks under different Production Sharing Contracts (PSC). At present, there are four production projects taking place at 8 blocks, and respective operators are conducting exploration works at another 21 blocks.
MPRL E&P has partnered with Myanma Oil and Gas Enterprise (MOGE) through a Production Compensation Contract (PCC) for Mann Field Enhanced Oil Recovery (EOR) Project since 1996, and as a result of its success there, the company reinvested in the offshore area. The company signed a Production Sharing Contract (PSC) in January 2007 on the western Ayeyawady offshore block A-6. Initially, the company proposed either block A-5 or A-7, but it awarded were block A-6 on which there was few past exploration data and public interest. Nevertheless, the company pressed ahead with its oil and gas exploration efforts at the block, and since 2007 when the PSC was signed, the company has conducted geological surveys extensively for four times along the coast, and in 2009 a 2D seismic survey covering an area of 1,955 kilometers was performed. In 2010, based on the results of the studies, another 3D seismic survey covering an area of 554 square kilometers was run, and geological/geophysical data were examined by experts.
With investment of 100 percent capitals at its own sole stakes as a Myanmar National led company, the company drilled the shallow water Pyi Thar-1 wildcat on its own risk in 2012. Pyi Thar (1-ST) was drilled up to a depth of 4,585 feet (1,398 meters) at the water depth of over 200 meters, and the well confirmed the presence of gas-bearing sandstones.
At the same time, with this discovery, the previously-held assumption by geologists that there could be no gas-bearing reservoir in the block A-6 was automatically nullified. By confirming there is a channel system flowing from east to west, MPRL E&P set off a new interesting future that lies with unlocking the prospectivity of the western offshore region in Myanmar. The nature of oil and gas industry is all about taking risks, and the success of Pyi Thar (1-ST), which is the result of taking sole risks by the Myanmar National led company brought about the interest of IOCs. 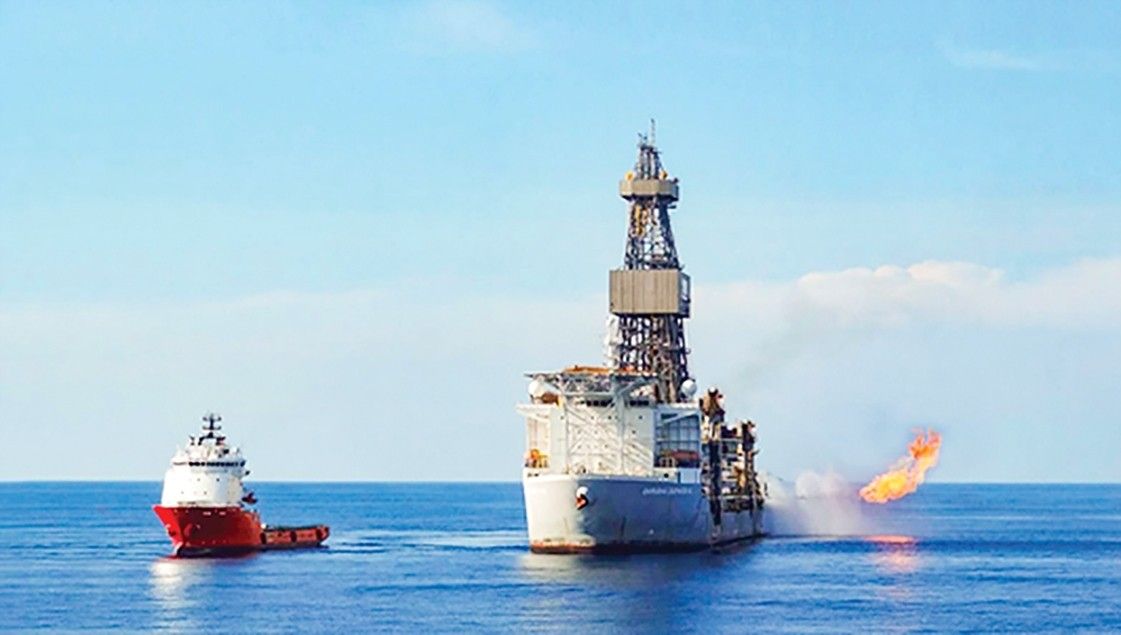 The First Ultra-Deepwater Project
It is both interesting and exciting when we look at the phenomenon of the Myanmar western offshore region, especially, with regard to the extraordinary challenges it has posed to our ultra-deepwater exploration efforts. The discovery of Shwe Field in the northern part of the western offshore region indicated that sedimentary sandstones which flowed from the north were trapped there. This is different from the way natural gas was trapped at the block A-6. In the block A-6, natural gas was discovered in the sedimentary sandstones which flowed from east to west. In other words, the block A-6 indicated natural gas deposits in sedimentary sandstones that flowed from the current Ayeyarwady river channels over a geological time span. The identification of Paleo Ayeyarwady System also meant finding of a new petroleum play system for scientists/experts.
Natural gas production from the block A-6 in Myanmar will happen at the water depth of around 2,000 meters, and it has to be recorded as the first history-making ultra-deepwater project in the country. Globally, there are only 16 such gas producing projects, and thus the block A-6 will become a remarkable project for the Myanmar offshore natural gas upstream industry. In this regard, there are several challenges in terms of both technical and operational, and in order to push ahead with the timeline, an enormous amount of manpower and financial resources will be needed.
As Myanmar's energy demands keep growing, only by exploiting our own resources can we produce affordable energy to fulfil these demands. Especially, electricity consumption is growing 12 % on a yearly basis, and natural gas is a second energy source for electricity generation after hydropower. Therefore, MPRL E&P, Total E&P, and Woodside Energy discussed how to expedite development and production efforts at the block. Ultra-deepwater development costs billions of dollars, and the most viable option has to be identified. In this regard, governmental support is of paramount importance.
At present, 1,800 MMscf of natural gas per day is produced from the four offshore projects in Myanmar. Out of which only 400 MMscf is used for the country, and 1,400 MMscf is exported. Myanmar is one of the top natural gas exporters in the South East Asia through the gas pipeline. Thailand, especially, depends heavily on Myanmar gas for its energy needs. China has shown an interest in Myanmar for fulfilling its future energy needs and exploiting Myanmar's geostrategic role. India also wants to secure natural gas from Myanmar. In other words, Myanmar is an important country regionally for these three countries.
As the natural gas production from the current offshore fields declines, the production from the block A-6 can be leveraged to fulfil both domestic needs and export demands to support the national economy. The offshore block A-6, which started from Pyi Thar (1-ST) wildcat drilled by the Myanmar National led MPRL E&P, will serve as the fifth natural gas project after Yadana, Yetagun, Shwe and Zawtika. What's more, it will arise as the first ultra-deepwater natural gas production project in the South East Asia Region.