A small and passionate group of young activists is working in diverse ways to raise public awareness about the threat Myanmar faces from climate change.

ON A Sunday afternoon in September, hundreds of people gathered on the cobblestones at Yangon's bustling Bogyoke Aung San Market waving signs and posters and chanting slogans such as "System change, not climate change" and "We want climate justice".

They were among the 7.6 million people around the world who took part in the first Climate Strike, held between September 21 and 27. It was the biggest climate change mobilisation in history.

The Yangon event was principally organised by Climate Strike Myanmar, a group of young activists led by Ko Kyaw Ye Htet, 21, a psychology student at Yangon University. Joined by other students and climate activists, the protesters demanded that private companies, the Myanmar government and ordinary citizens do more to combat the growing climate crisis. Though small compared to many of the protests elsewhere in the world, it was part of a growing movement that is winning converts particularly among Myanmar's youth.

Climate change poses an urgent threat to Myanmar. In the Global Climate Risk Index published by Germany-based non-profit Germanwatch, Myanmar is ranked among the top three countries most effected by extreme weather events between 1998 and 2017.

The worst in Myanmar's modern history was Cyclone Nargis in 2008, which claimed more than 138,000 lives and severely affected 1.5 million people, while Cyclone Giri in 2010 and Cyclone Mora in 2017 brought more death and devastation. The risk index warns that cyclones, floods, drought and episodes of extreme heat are projected to increase in frequency and intensity in the coming decades, thanks to climate change.

Frontier met five young environmental leaders from various parts of Myanmar who are working to combat climate change in new and innovative ways, including street activism, social media, education and advocacy. They represent a new generation of leaders and thinkers who are racing against time to try to slow global warming, natural resource exploitation and species extinction. As global temperatures and sea levels rise, so are Myanmar's youth as they strive to meet the challenges of a growing climate crisis. 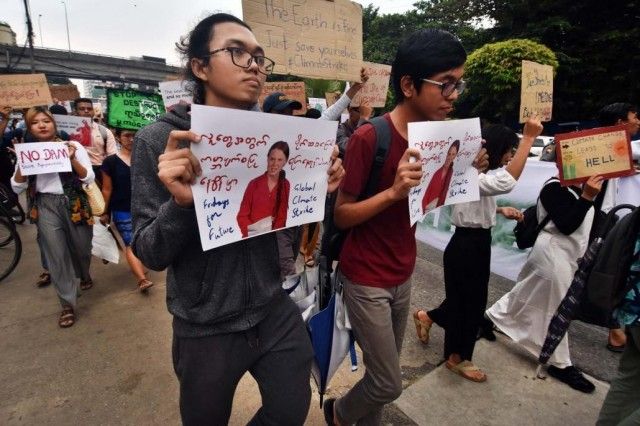 From the ground up

"We always blame older people for what they did to the environment. I don't want the next generation to blame us [young people]," said Ko Kyaw Zin Myo, 20, who heads the Mandalay chapter of grassroots environmental group Trash Hero. His work involves organising fortnightly rubbish collection events, education programmes at primary schools and social media campaigns to discourage the use of consumer plastics.

Youth-led Trash Hero, which has 13 chapters throughout Myanmar, is known mainly for cleaning garbage from public spaces. However, Kyaw Zin Myo told Frontier that one of the main motivations for campaigning against consumer plastics was their contribution to global warming.

A 2019 study by the Center for International Environmental Law, a not-for-profit law firm with offices in Washington and Geneva, reported that, at current trends, the plastics industry will account for 13 percent of global carbon emissions by 2050. Plastics produce greenhouse gases at every stage of their production and beyond, including manufacturing, refining and disposal.

"I want to show people through our actions that this problem is important to solve," said Kyaw Zin Myo, adding that their campaign includes raising awareness on social media by sharing multi-media content accompanied by the slogan "we clean, we educate, we change".

As Trash Hero recognises, social media (and Facebook in particular) is a powerful tool for spreading information about grassroots causes. With more than 20 million users in Myanmar, Facebook provides the easiest and fastest means for people to create and share content, even if the platform is also often abused to spread misinformation.

Detailed climate change information in Burmese languages is scant and to help overcome this paucity, two Yangon bloggers, Ma Myo Hsu Wai, 23, and Ma May Kham Eain, 24, are taking advantage of social media to build climate change literacy. They have created Warriors of the Earth, a Facebook page that provides information about climate change in English and Burmese. "We chose Facebook because it is free and people all over the country can read and learn," said the two young women.

In late October, they led two days of workshops for budding climate activists at the YMCA in downtown Yangon. Although the free training event was held in Myanmar's largest urban area, their hope is that access to climate change information and trainings on adaptation strategies will become more widespread, particularly in rural areas where resource dependent communities are often the first to suffer from events such as flooding and droughts. 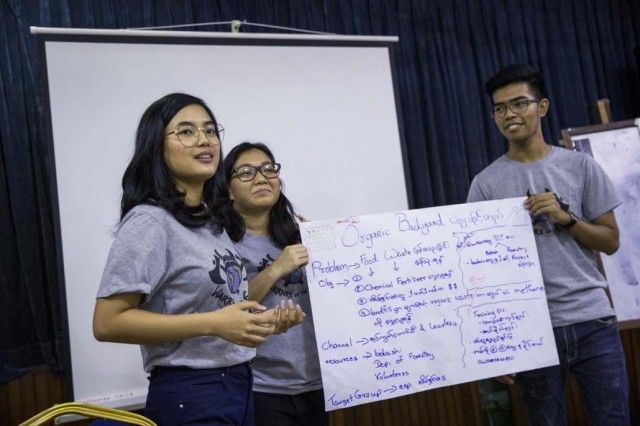 Myo Hsu Wai's said topics related to climate change, such as the water and carbon cycles, were taught in a piecemeal way across different subjects at government schools and were not integrated to highlight the severe implications of climate change for the natural world and society. She said, "In our state schools there are some lessons related to environmental education, but the problem is that we are not taught that these are linked to problems we are facing in Myanmar." She hopes this ommission will be adddressed with new curricula so that communities can better understand, mitigate and adapt to climate change.

The first signs of progress have been in higher education. Environmental education advocate Dr Thant Zin, 33, is the project manager for Transformation by Innovation in Distance Education, a four-year project to introduce interdisciplinary environmental education into government universities. In the first stage of the project, which began in February 2018, Thant Zin and his team worked with the Ministry of Education to develop an environmental studies undergraduate major at Yangon and Mandalay universities.

Though he said this had gone well, he shared Myo Hsu Wai's concern over the lack of compulsory climate change education for Myanmar children below university age. "Young people can learn from the internet about climate change, but there is no systematic teaching or delivering of this information in education institutions," he said.

The policy includes plans for promoting environmental education and promises that the government will "take action to raise awareness around climate change of all people on climate change vulnerability, adaptation, mitigation, low-carbon and climate-resilient development and sustainability through formal and non-formal education at all levels." It says "primary and secondary education levels" will be prioritised. 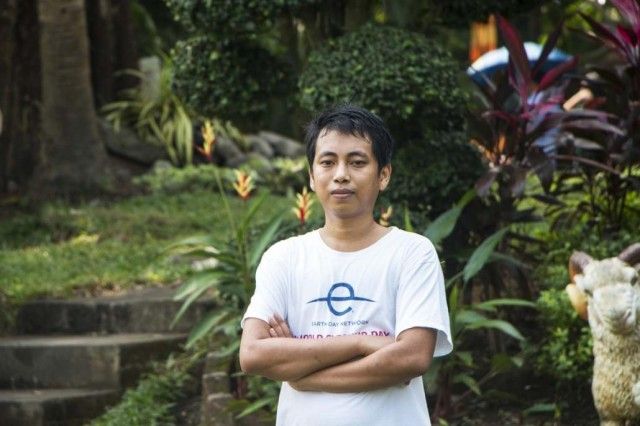 While it is too early to say if this educational initiative will succeed, Ko Hlaing Min Aung, 28, from Kyaukphyu in Rakhine State, is among the climate activists who have taken the matter into their own hands.

Now living in Yangon, he is the Myanmar assistant manager for Earth Day Network, which coordinates a worldwide movement for "environmental democracy". The network also leads an annual celebration on April 22, called Earth Day, that was first observed in the United States in 1970. This event is considered a foundational moment for the modern environmental movement, and is now observed worldwide.

Hlaing Min Aung, who also visits high schools in Yangon to teach volunteer classes in environmental science, told Frontier, "Our country does not have a lot of time; we need to find solutions now."

Dr Aung Tun Oo, 32, the volunteer country representative for the Young Professionals for Agricultural Development, a global network for young professionals interesed in sustainable agriculture, told Frontier, "Young people can't be waiting for older people to take action. We need to start making the differences we can."

Aung Tun Oo, who has a PhD in Agricultural Economics from Ghent University in Belgium, is originally from a small village near Taungoo, Bago Region. There, on 15 acres (six hectares) of land, his parents grew rice, sugarcane and sesame to pay his school fees. He explained that people in rural areas, who make up nearly 70 percent of Myanmar's population, are the most vulnerable to the effects of climate change, such as flooding and water insecurity, and also the first to experience it.

"My parents were farmers, and climate change has exceeded their capacity to adapt to environmental changes. So, we need to find solutions to help them build resilience," he said.

He believes that community mobilisation and collaboration are key to developing effective strategies for adapting to climate change, but this will also require policy makers, NGOs and the private sector to work together.

"Are you a researcher, a farmer, an engineer?" Aung Tun Oo asked. "Whatever field you're in, think about how you can help find solutions to climate change. Contribute in any capacity that you can."

Mangrove deforestation emits as much CO2 as Myanmar each year