27 Sep 19 - Source: Myanmar Times - The Yangon River is thick with mud, and busy with boats of all sizes. Sometimes shipping containers make their way across the city shores, and others times trawlers can be seen shifting sand or oil between the docks.

But these giants are far outnumbered by the smaller, more agile motor-powered canoes dotted across the river banks.

Ko Zaw Lin Aung's boat is one of them, but most days it's not cruising luxuriously across the water like a gondolier. He steers his small boat with skill though, carrying recyclable plastic bottles, aluminum kitchenware and beer cans scooped up from the river.

The 30-year-old has been picking up trash on the river's muddy waters for the past 18 years. He usually sails from Pazundaung Creek to the mouth of the Bago River.

Plastics bottles, tin can, beer bottles and anything which can be recycled – those are Ko Zaw Lin Aung's bread and butter. Sometimes, he even fishes out plastic chairs, baskets, or heavy furniture and household rubbish. The boatman gets up early in the morning to catch the tide and load up with the river's daily offerings.

There are about 40 other helmsmen collecting plastic and recyclables on the river, and most work near the Pazundaung Creek and the Thanlyin and KyeeMyinDaing Rivers, each marking out their routes along the shores. Most of the floating trash gathers around these areas,washing up on the river banks, between the commercial ships, or getting stuck in the mangroves.

For the plastic recyclers, floating rubbish is gold.

"People see this as trash but we see it as gold, it really shines in my eyes," said Ko Zaw Lin Aung.

In Myanmar, those collecting plastic on the rivers have a bad reputation as many are perceived as dirty scavengers. As the Burmese saying goes: "If one fish has gone bad, the whole catch will be rotten."

"People say we are dirty, but that's not right," said Min Win, a 21-year-old rubbish collector from Dawpone Township. He left school in grade 3 to support his family. 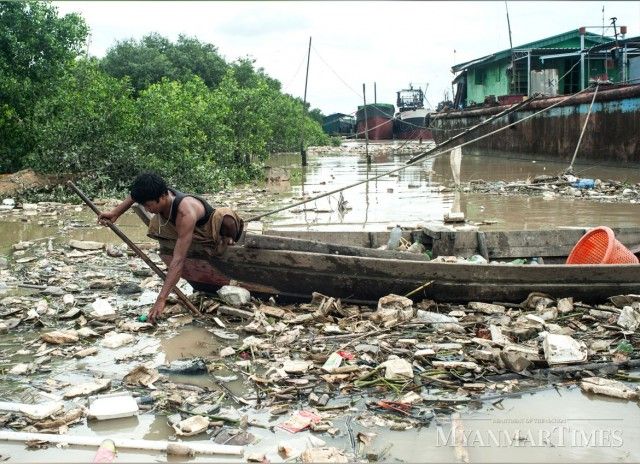 People see this as trash but we see it as gold” - Ko Zaw Lin Aung. Phoe Wa/The Myanmar Times

In the city many people riffle through the YCDC wheelie bins for recyclable bottles and containers, while some roam the streets with large bags full of plastic for recycling. Not all of the recyclable rubbish ends up in the bin, or with these people.

Thousands of people live and work beside the river, and without proper roads, bins or any kind of waste management system, it's all too easy to toss away waste into the river. One third of the plastic collected on the river is cleaned by recyclers, and without proper knowledge as to what might be useful at the recycling plant, some of the material simply ends up as waste.

As a byproduct of their work, however, the river ends up a slightly cleaner one.

"I don't know whether I manage to clean what I find for recycling. All I know is the more plastic bottles in the creeks, the happier we are," said Ko Aung Thu Win.

The plastic fishermen earn K200 for three beer cans, K50 for a plastic bottle and more for scrap metal, which is then melted and sold for casting into other types of containers. On average, they manage to make up to K10,000 per boat per day.

However, working on the Yangon River can prove perilous. Snakes and scorpions may hide among the trash, and can give an unsuspecting hand a sharp – and poisonous – shock.

"Poisonous animals can appear at any time. If you're not careful you can get bitten. It's just a matter of taking care," said Aung Paing, a 25-years-old plastic recycler.

Boats can also be set adrift, lost in the tides if the owner is not careful enough wading through the shallows. Colliding with bigger ships is always a risk further out in the river.

"People can slip and fall on the ground getting on and off the boat, but if you slip in the middle of the river that can be a real problem," said Ko Zaw Lin Aung.

Everyone understands the dangers of the job, and enjoys the adventure of a day on the water. Once the tide ebbs and they return to shore, the rubbish collectors gather at the nearby beer station for a well-deserved drink.

"The time has passed, but we never get bored of this life. Life is satisfying if you live properly," added Ko Zaw Lin Aung.