DRR -Team arrives in Myanmar to advise on floodings Source: DSS Water / DRR Team - On 15 September a DRR-Team counting 4 Dutch experts arrived in after DRR-Team has been selected at the beginning of this month. Their objective: a scoping mission related to the floods that hit Myanmar in Mid-August. These floods led to more than 110.000 displaced persons, and more than 70 people were killed in a landslide.

The scoping mission focuses on the Bilin and Lower Thanlwin Catchment and aims to formulate for the short and long term to prevent flooding and landslides and draw up recommendations on how to prepare for disasters.

We hear from DRR-Team expert Carolien Wegman who writes down her first findings in the field.

"On Sunday the whole DRR-Team including Marco Hartman, Kees , Alex Hooijer Carolien Wegman arrived on the same flight from Bangkok to Yangon. Except for Tanya Huizer, who was already in Myanmar. After an hour of relaxation and showering, we met Aung Myint Oo (Dutch Embassy) and Tanya for dinner. At 8 pm we had a meeting with the WorldBank in which they explained their findings of a 'Quick assessment of the economic impact of the floods of 2019'. We also discussed the possibilities whether recommendations from our study could be financed by the WorldBank and/or DWIR* (find a list of abbreviations below)." 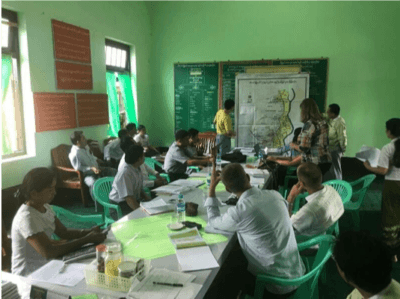 "On Monday we had a very early because we had to leave the hotel in Yangon at 6:15 am. We met up with the DWIR representatives along the way and together to Mon State. We visited the Bilin River Catchment area and at several sites were informed about the impact and water levels of the 2018 and 2019 floods. In we had a meeting with the DWIR-representatives, the Deputy Township Officer and an assistant observer of DMH. They told us more about the floods of 2018 and 2019 and the disaster management scheme they have since last year. That is twofold including a 'preparation program' and a 'response program'. After the we visited some more sites in the Bilin Township where we also talked to residents and their evacuation procedure. , we to Hpa-An on the road that was flooded in 2018. Around 6 pm we arrived at ThanLwin Paradise hotel, just in time to witness the sunset over the river."

"We started the day with a meeting at Kayin State Regional Government Office. We met shortly with HE U Saw Pyi Thar, Minister for Environmental Conservation, Forest, Mine Road Transport for the Kayin State. We asked him how the DRR-Team can support him and he introduced us to the DMH and DWIR officials for more detailed discussions on the system and measures being taken. After this, we met with many representatives of different entities within the government (GAD, DWIR, DMH, IWUMD DDM). They gave us some insight the water management system of Hpa-An and the problems they face. We heard a lot about measurements being taken (for dredging purposes) and specific water levels, inundation heights and shelters being built. 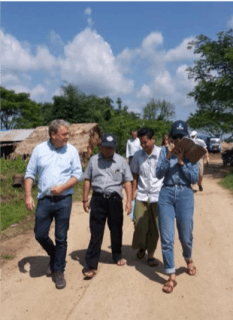 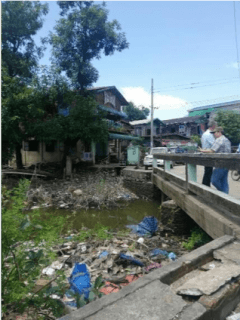 However, to get an overall view the subject remains a challenge. Nonetheless, we got insight the functioning of different public entities and their communication. After the we continued with field visits in the area around Hpa-An and on the way to Mawlamyine we observed some more flooding. This appeared to occur every year, last year even blocking the main road for almost two months! In 2019 it was blocked for almost a week."

"We woke up in Mawlamyine and went first on an official meeting with the Chief Minister U Tun Min Aung of the Mon State Government. He really took the time for us and knew a lot about water-related issues in his state. we had two meetings in both the Mawlamyine and the Kyaikmayaw township office meeting with the officials from the different entities (DWIR, DMH, IWUMD, DDM). We saw some differences with the previous two visited regions. For example, people do not always follow instructions from the government when it comes to evacuation. They are more self-supporting. They have their own boat and typically a house so they can stay high and dry during a flood. They are quite used to it, as it happens every year, though 2019 was high and long. The government focusses on disaster response and not so much on disaster prevention. After the we had three more site visits in the region in which we saw the houses, the boats and met some residents. 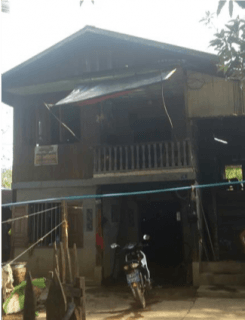 On Thursday the team will split: some of us will wake up very early and visit Ye Town, almost 200 kilometers further South, while other team members stay in Mawlamyine for more discussions with the different stakeholders on their activities."