A win-win project for Irrawaddy dolphins ​In the sixth instalment of a series profiling Myanmar's leading responsible tourism businesses, Frontier highlights a project aimed at helping to save the Irrawaddy dolphin.

TOURISTS are helping to keep alive a local fishing technique on a stretch of the Ayeyarwady River north of Mandalay that involves fishers working in partnership with Irrawaddy dolphins, an endangered species found in a limited number of waterways in Southeast and South Asia.

The technique, known as cooperative fishing, involves the fishers and the dolphins working together to fish and share the catch in a symbiotic relationship. Fishers call out to dolphins, which then drive the fish in the direction of the fishing boats.

However, both the technique and the dolphins are under threat from the persistence of harmful practices, such as stunning or killing fish using metal prods connected to car batteries. The short-term gains of electrical fishing entail long-term devastation, particularly in the form of overfishing. This threatens the dolphins, which rely on a steady supply of fish to survive, as well as the overall ecosystem and the sustainability of local fishing livelihoods.

The use by some unscrupulous fishers of dynamite is an additional threat, but even ordinary fishing nets are capable of killing the mammals. The dolphins have a gestation period of 14 months and are weaned after two years, meaning their numbers do not replenish quickly. Though Irrawaddy dolphin populations are said to be in decline elsewhere, annual counts on the Ayeyarwady River over the last decade have revealed a broadly stable population of between 60-70 individuals, according to the Wildlife Conservation Society.

The fragility of the dolphin population has added urgency to conservation efforts and among the most innovative is the Ayeyarwady Dolphin Conservation and Ecotourism project, managed by U Thant Zin, a WCS staff member from Mingun near Mandalay.

The WCS-funded project, launched in 2014, aims to provide incentives for fishers to maintain cooperative fishing and discourage the use of electrical fishing in the Ayeyarwady Dolphin Protected Area, which extends over a 74-kilometre stretch of the river north of Mandalay, between Mingun and Kyaukmyaung and was established in 2005 by the Department of Fisheries with the support of the WCS.

Thant Zin thinks ecotourism could help protect the Irrawaddy dolphin population in the Ayeyarwady as well as the traditions and cultures of the fishers and other communities living along its banks. Revenue generated from tourists keen to witness the spectacle of cooperative fishing provides the fishers with extra income and also supports their communities through a village fund, Thant Zin said.

Thant Zin's project has so far attracted the participation of eight villages along the river in Wetlet Township in Sagaing Region. He said the project provides local villages with a strategy, funding and education; it is then up to the villages how they choose to use these resources. 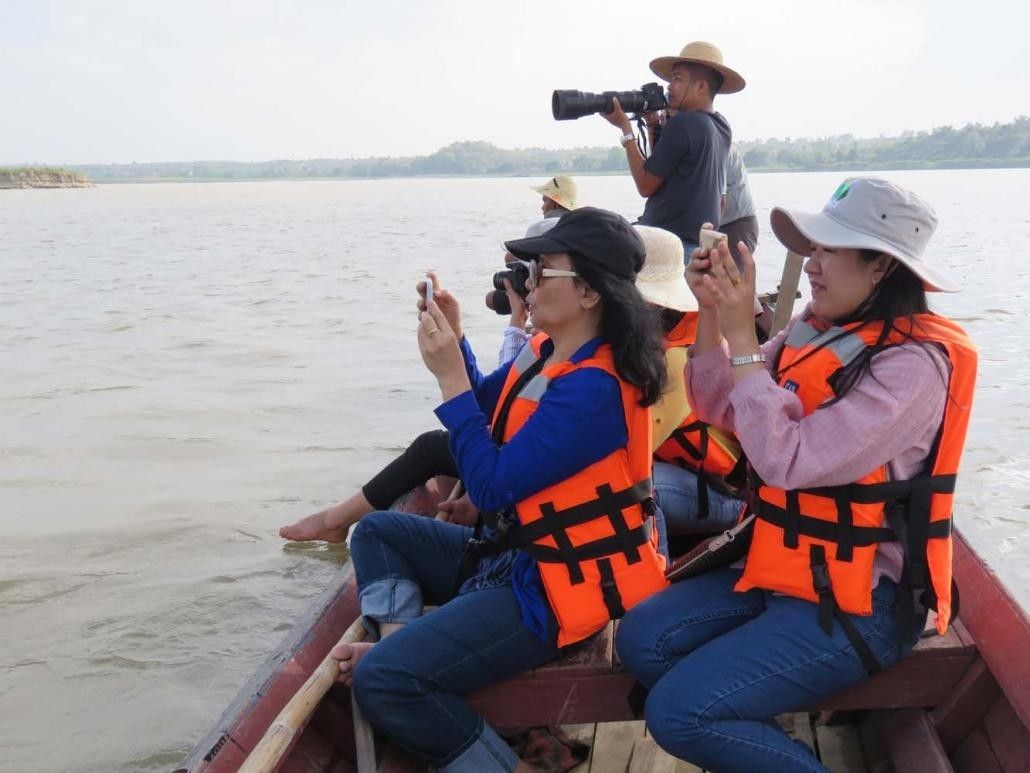 Decisions are mostly made on a local level, and local leaders are responsible for most of the day-to-day operations. A leadership committee makes bookings before calling a community leader, who then makes the sleeping, dining and boat travel arrangements and meets tourists when they arrive.

In December 2018, this grassroots cooperation was recognised at the Myanmar Responsible Tourism Awards, where the ecotourism project won the Best Community Involvement in Tourism prize.

Since then the project has continued to expand. On April 1, residents opened a community lodge in Indaung village, where foreign and Myanmar guests can stay in bamboo bungalows for US$25 and K20,000, respectively. Thant Zin said the project welcomed more than 300 foreign and 700 Myanmar visitors last year and the lodge should provide a further boost by making the area more accessible to tourism and encouraging visitors to stay for longer.

"The lodge can generate more income for the community," he said. "Before tourists mostly came by boat from Mandalay, either on a day trip or sleeping on a boat. It was quite expensive. By opening the lodge, more people will be able to visit."

The Ayeryarwady Dolphin Conservation and Ecotourism project also operates patrols to monitor the dolphin population and to watch for the use of illegal fishing methods, which are reported to the authorities. Fishers also receive cash rewards for reporting illegal fishing nets.

The patrols send the GPS coordinates of dolphin sightings to fishers in the area, meaning that tourists are less likely to go home disappointed and the fishers have a better chance of a good catch.

Thant Zin said that improving the welfare of the dolphins was vital to his vision: "If one dolphin dies, I'll invite all the reporters. I will pay for their transportation charges."

The project, says Thant Zin, has tried to turn a challenge into a win-win situation, by providing an unforgettable experience for tourists, helping to preserve local culture and beneficial traditions such as cooperative fishing, generating extra revenue for local communities, and contributing to efforts to protect the Irrawaddy dolphin.

Those interested in visiting the project or staying at the community lodge can email This email address is being protected from spambots. You need JavaScript enabled to view it. or call Thant Zin on 09-2594-63540 or the lodge manager on 09-4506-60333.

This is the sixth in a series of reports about winning entries in the Myanmar Responsible Tourism Awards, of which Frontier Myanmar was a sponsor. The awards were announced on December 11, 2018. More information is available at: www.myanmartourismawards.wordpress.com/

A Role Play of Wetlands in Yangon