The company that works to serve the people Workers from the company’s Singapore and Myanmar offices participated in the project. Photo - John Grafilo

20 Nov 18 - Source: Myanmar Times - Villagers usually start their day early, doing their household chores and attending to their farms before the sun gets too hot. But one Monday, residents of Tha Pyay Kone Village in Hmawbi township in the outskirt of Yangon were exceptionally busy. It was an auspicious day for the village. It was the day water would start flowing from taps in front of their houses.

U Saw Lwin, the village elder, could not hide his excitement about the prospect that the village would no longer be at the mercy of the weather or merchants who would go around several villages aboard their water tankers selling the precious resource to villagers during the dry season when their supply from wells and rainwater ran low.

"For the first time in my life, we will have water just in front of our yard," he said, beaming with childlike excitement.

There were plastic chairs and tables laid out under trees, balloons, and women were cooking food. The men were busy working around a newly constructed water tank and its adjacent two smaller plastic filtration tanks. 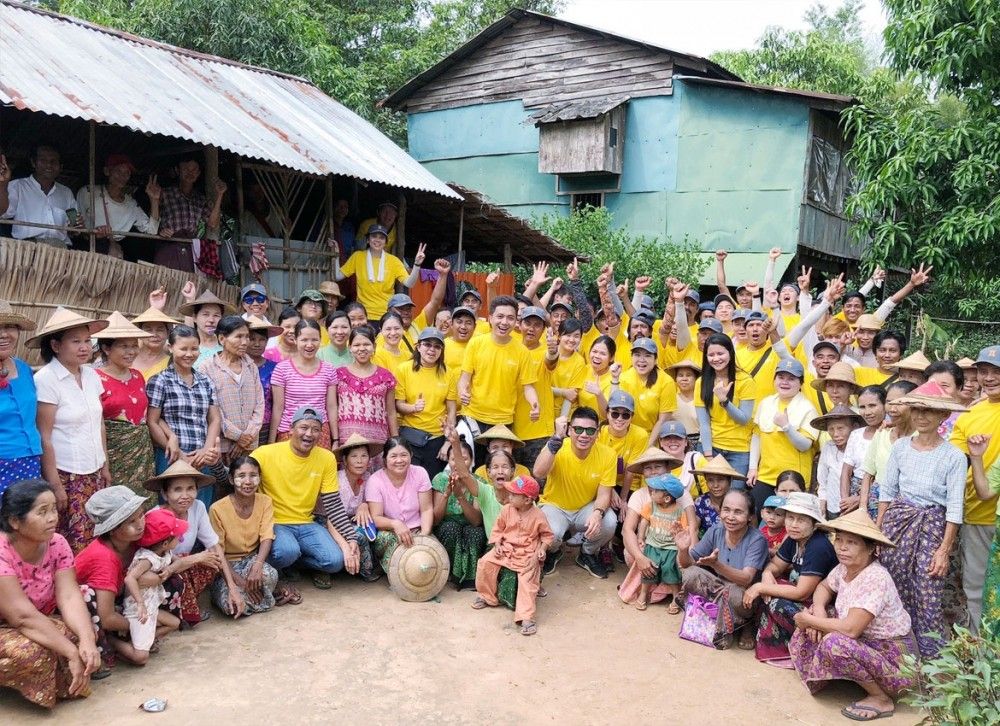 After two hours of frenetic work punctuated by laughter and singing, the workers rested and the snacks, which the villagers had been preparing earlier, were served to the delight of everybody.

The "yellow workers", some 40 in number, were staff of Singapore-based company company Woh Hup Ltd, a leading construction and civil engineering specialist behind some of Singapore's most iconic developments. Among its completed projects are Orchard Central, Reflections at Keppel Bay, Gardens by the Bay and The Interlace. 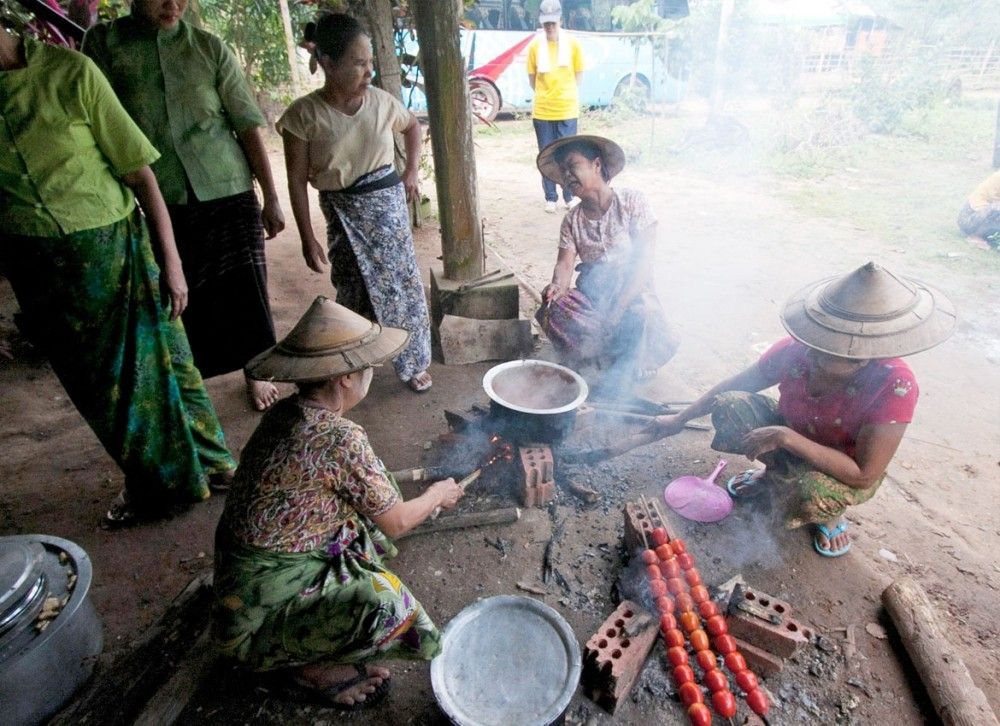 The construction of water facilities in Tha Pyay Kone village, which has about 500 residents, is part of the US$70,000 (K111.36 million) water and sanitation project initiated by Woh Hup in the area.

The project includes providing water at the community level in three villages and one clinic and improving sanitation and hygiene facilities in two schools within the villages. More than 4,200 villagers across the three villages will directly benefit from this project when it is fully completed next month. 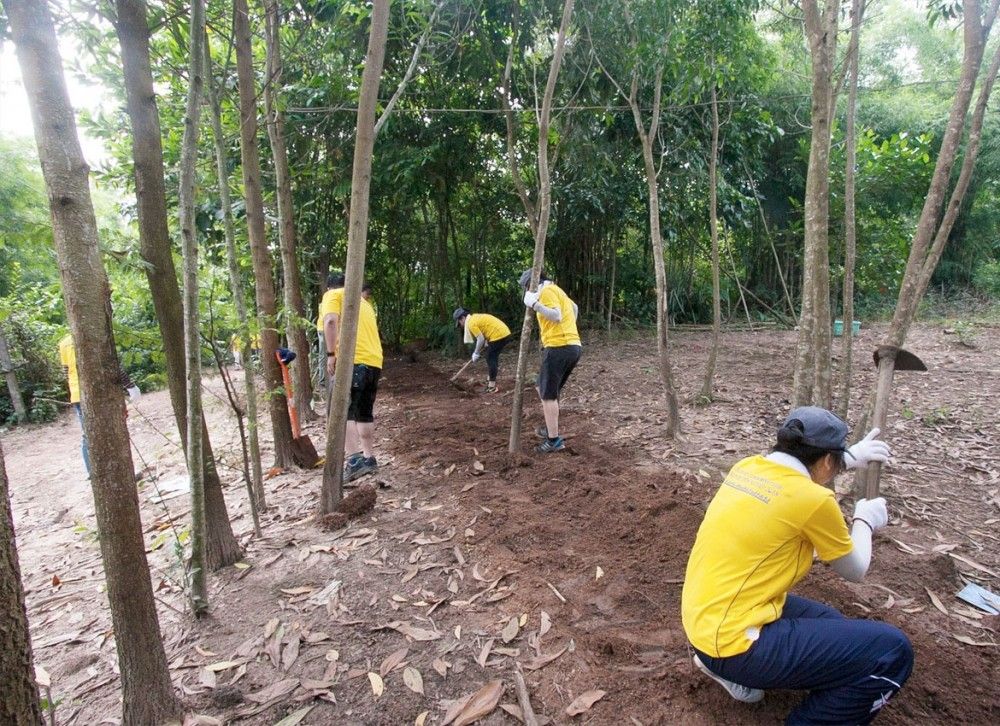 "Water is a basic necessity of life," said Kenix Tok, country representative of Woh Hup in Myanmar, "Once we satisfy this need, the people can live healthier live and can focus on other things."

The company has been doing community projects in different countries in the region, according to Tok adding that these projects focused on helping the less fortunate. He said that in the Philippines, they built 30 low-cost housing units for the less fortunate, while in Thailand, the company built a community centre in a village in Chiang Mai.

"We always make sure that our projects will have direct impact for the intended beneficiaries in a sustainable, long-term way," he said. 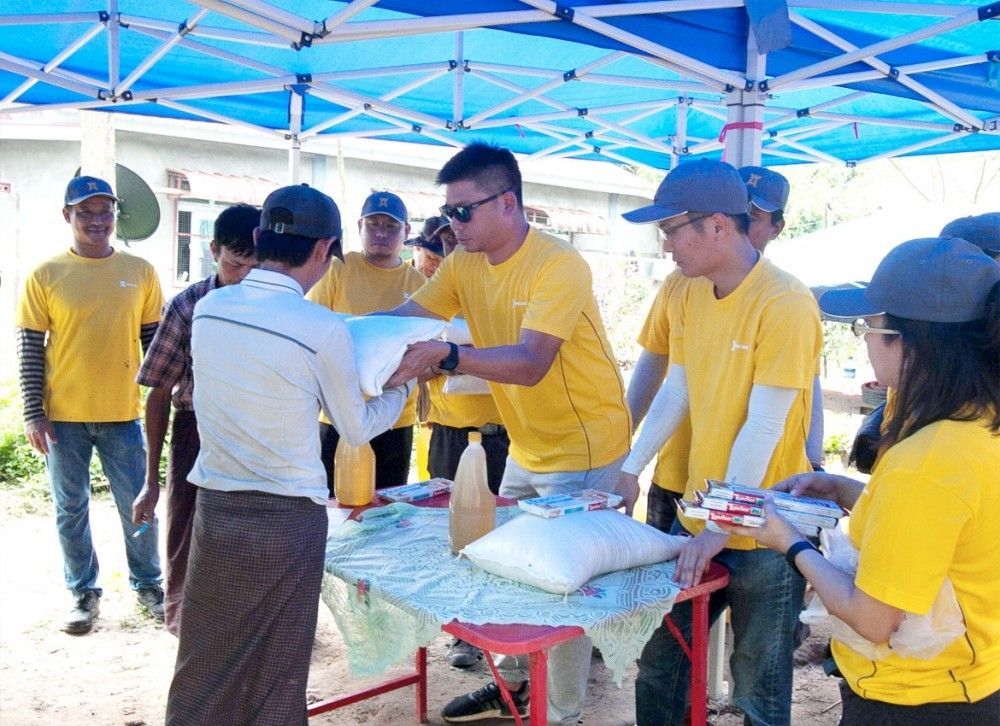 In selecting projects and in ensuring their sustainability, Woh Hup partners with non-profit organisations. In the case of the Hmawbi projects, the company teamed up with Singapore's Mercy Relief, a NGO that has direct links with the community.

Galvin Tay, assistant manager of Mercy Relief's international programme, said that they always seek the participation of residents and the village officials in projects through their local partner Myanmar Heart Development Organisation.

"Without the participation of the people and the officials, the project would not be sustainable," he said. 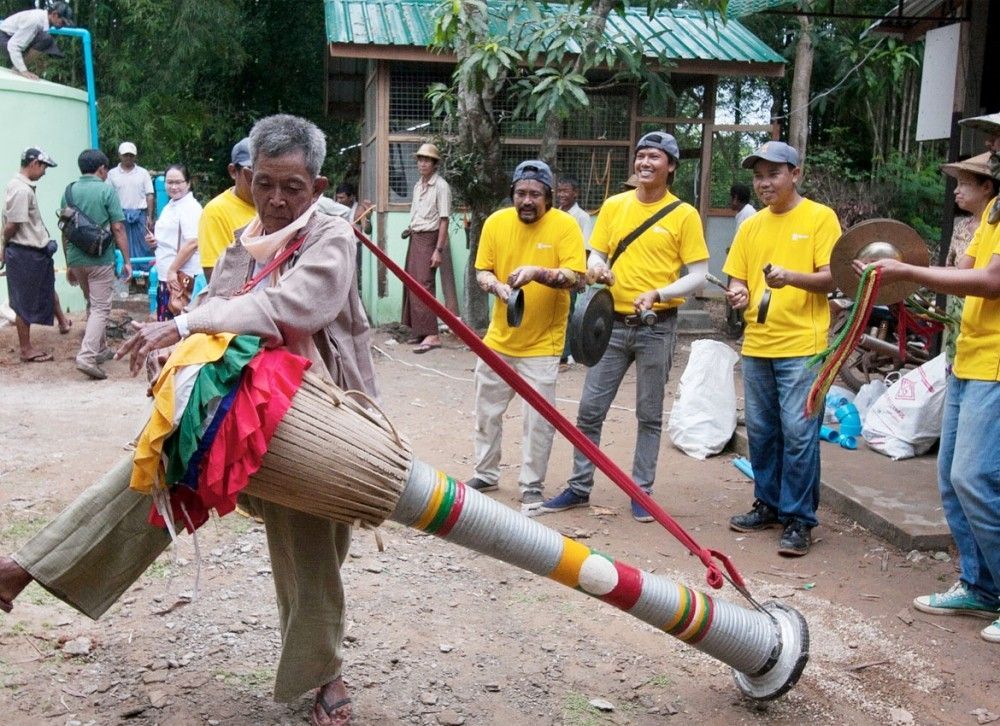 Tay said that for the water project in Tha Pyay Kone Village, they are teaching the people how to maintain the filtration system in order to keep the water potable.

"The materials we use for the filtration system can be found in the village, so that will be no problem for them in maintaining it," he said.

Aside from helping the underprivileged communities, Tok said these projects also serve as team-building activity for its more than 2000 employees and inculcate in them the value of caring and sharing with their less fortunate brothers and sisters, 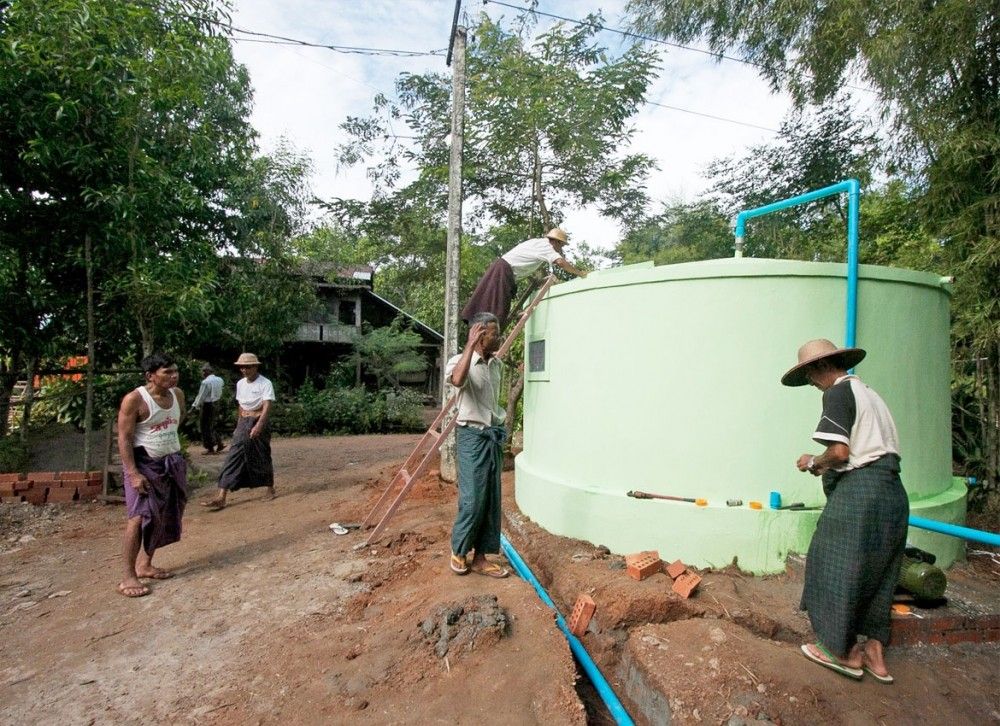 Half of the 40 staff who helped in the Hmawbi projects came from Singapore while the other half were from the company's Myanmar office.

While it is not unusual for companies to send their staff to team-building activities, Woh Hup sends them to work in community projects. For the Hmawbi project, staff from both their Singapore and Myanmar offices made a total of four trips over the last two months to build the water supply system.

"We have been doing community projects as part of our team-building activities," Tok said. "Our founding chairman believed in giving back to the community, and our chairman and senior management carried on the tradition. We want to inculcate in every employee and worker in the company the attitude of helping people in need and at the same time caring for each other," Tok said. 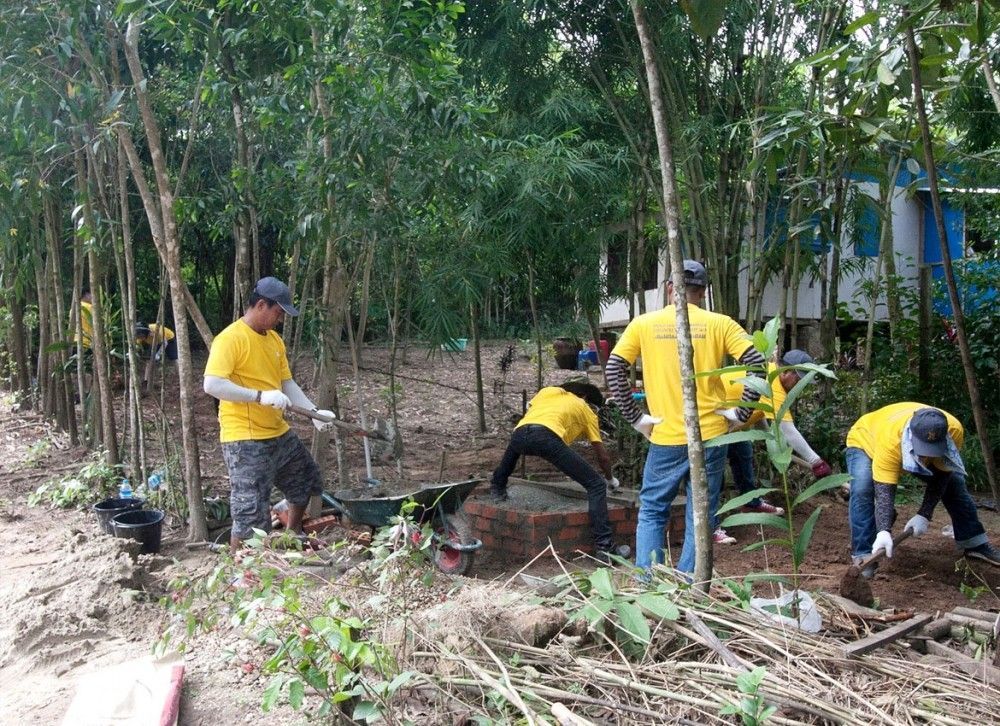 Perhaps, the best example of this caring attitude for the people and its workers was the presence of one of the company's executive director Yong Derong during the inauguration of the water system in Tha Pyay Kone Village.

The boyish-looking executive director mingled gamely with the villagers and with his own team during the event; just one of the boys.

"Even in Singapore, he does not stay in his office, he goes around the work sites and checks on the condition of the workers," shared one of the staff who said he has been working in the IT department of the company for the past nine years.

In Myanmar, the company has adapted to the slowdown by diversifying its services from general engineering and construction design to providing services such as technical studies, prefabrication work and pre-castings and construction support rentals, among other things, in order to maintain its operations and 50 core staff.

The company has been in Myanmar since 1993 and has constructed several buildings in Yangon and Mandalay, including the Sedona Hotel extension.

"Safety is always a paramount consideration in all our projects," Tok said.

Tok admitted that when the company started in Myanmar, workers were not conscious of safety and would not even wear helmets and safety shoes.

"We have to hold seminars two times a week to inculcate in them the importance of safety," he said. "For what good it is if they make money but they end up being disabled, or worse, dead."

But the attitude of the workers has changed since then and they are now safety conscious, Tok said.

The Woh Hup executive is hopeful things will eventually pick up again in the construction sector, after almost two years in doldrums. The company is bidding on several projects, which are mostly office, medical and industrial buildings.

"There are business prospects," Tok said. "We are ready to participate in the development of this country."

Stuck at sea in the water prison